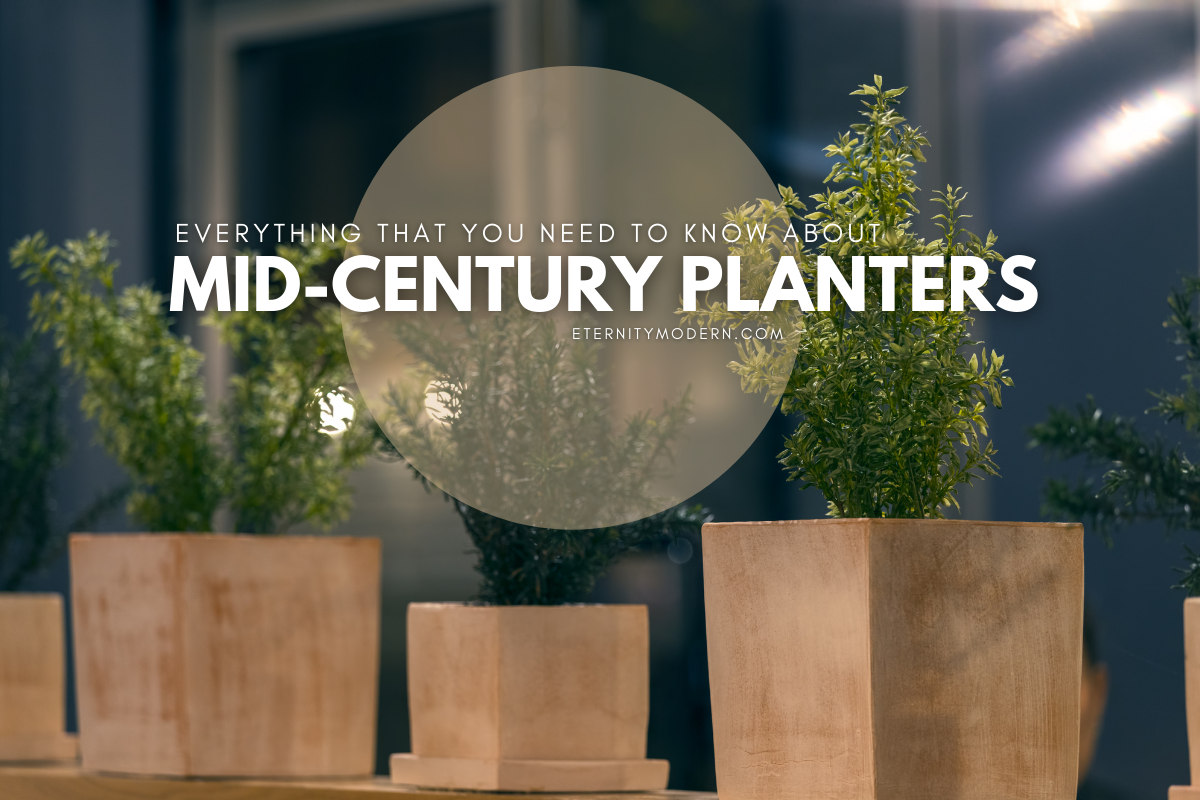 The Mid-Century Modern aesthetic may be a blast from the past, but it's got infinite charisma. The streamlined looks, the clean lines, the smooth curves everything is as timeless as possible. This aesthetic is visualized in many formats be it furniture, home interiors, or even light fixtures but the most nuanced one can be attributed to Mid-Century Planters.

These planters are a small, sophisticated, and gorgeous way to add a casual statement piece in your interior designs. You can easily place a planter next to your mid century modern sectional in the living room. They're got a retro edge and can be placed in both indoor, semi-outdoor, and fully outdoor settings. If you're interested in getting yourself a Mid-Century Planter, and are searching for more information on it, here's everything that you need to know about this small but cool interior design accessory:

Vintage aura: The very first thing that you might notice about your Mid-Century Planters is its distinctly vintage aura. It's nothing quite obvious or dramatic. It's just a subtle look that these planters wear like an invisible shroud. It may be in the form of wooden accents, the curvature of the planter shape, or even some sharp angles reminiscent of the vintage era. This aspect lies in the details, but it's also unequivocally apparent because you don't have to try very hard to look for it or define it in physical terms.
Gracefully dramatic: The graceful drama of Mid-Century Planters is another one of their distinct characteristics. Some of them have incredibly sculptural forms that can ramp up the drama of your space. Others have a futuristic or whimsical vibe. There are also planters that have a geometric theme that plays up their modernity.

Clean lines: Another notable characteristic of Mid-Century Planters is the evocative use of clean lines in their designs. This aspect is seamlessly and smoothly integrated within the design of the planter. It could be the straight lines of the base, the oblique angle of the planter tummy, or basically any other aspect of the design. This characteristic is highly apparent, so you'll be able to spot it out immediately.

Smooth aesthetic: Mid-Century Planters have a very smooth aesthetic. This is characteristic of all modern paraphernalia designed between 1930s to 1960s. To this day, even in contemporary times, having smooth, visually pleasant, and symmetric looks is considered to be an attribute of gorgeous modern paraphernalia. You'll definitely be able to easily recognize this feature in Mid-Century Planters.

Wooden finish or accents: Wooden finishes and accents are an integral part of the Mid-Century look. Therefore, any planter designed to represent this theme would automatically be inclines to have some manner of wooden accents present on their body. It could be in the form of a base, or it could be naturally incorporated through the plants that have been put inside the belly. It depends on your personal preference.

Primary color accents: Aside from understated vintage glamour, Mid-Century Planters also tend to feature unique retro looks. They're usually incorporated in the form of primary colors painted across the planter's surface a la De Stilj theme. Note that these colors do not take up the entirety of the planter aesthetic. They're usually incorporated in tandem with either white or black base colors.

Achromatic color scheme: Most Mid-Century Planters feature a fully achromatic color scheme. They're either fully white or fully black. This single-toned aesthetic gives them an infinite grace that really complements the smooth form, clean design, and even the wooden accents that are often featured in such planters. It also adds a simple, minimalist beauty to such planter's design.

Less is more aesthetic:  One of the major and most important characteristics of Mid-Century Planters is that they are incredibly simple. There's nothing extra or frou-frou about their designs as is norm with terra-cotta concoctions. In fact, they often feature smooth finishes and sometimes even metallic accents that give them a radical modernist edge. The inherent form of these planters is what makes them so unique and distinguished.

Understated elegance: The utter sophistication of Mid-Century Planters comes from an amalgamation of all the above-mentioned qualities. These planters are nuanced, designed with care, and feature an inherent flair that makes them an instant statement piece in any room. You can easily incorporate them in any space around your home and they'll become the magnum opus of the room.

There are a number of places in which you can feature Mid-Century Planters in a lot of ways. Let's look at all of them:

In your bedrooms: Even a single Mid-Century Planter can transform your bedroom aesthetic by emulating both style and freshness within the ambiance. You can a medium sized statement planter to be placed in a focused corner of your bedroom. You can even match it with relevant accessories for the best impact.

In your verandah/porch: If you've got a porch or a verandah, then this semi-covered space would be an excellent place to feature a number of Mid-Century Planters. You can design a whole outdoorsy ambiance out of them. With their unique shapes, smooth lines, and sometimes-geometric forms, these planters are sure to spruce your spaces up with panache.

In your patios or balcony/terraces: If you want to spruce up any outdoor area in your home be it a patio, balcony, or terrace all you have to do is furnish it with Mid-Century Planters. You can curate an entire collection of these planters and arrange them carefully and strategically in these spaces. You can pair them with outdoor wicker, rattan, or metal furniture for the best impact. The challenge lies in making the planters shine, so you should select furniture that's understated and neutral to do that.

In your dining areas: Dining areas are the most challenging to decorate because they need to be stimulating, functional, and welcoming all at the same time. Featuring gorgeous planters in these spaces is a sure-fire way to tick all of these pointers off the checklist. You can feature a large to medium sized Mid-Century Planters in the corner of your dining area for subtle but ever-present impact. If you want to be more obvious, then you can place a statement planter on either side of your mid century modern sideboard. If you can manage to find a small-sized Mid-Century Planter, then you can even place that in the center of your dining table.

In personal nooks and alcoves: There are tons of small nooks and alcoves around your home that can be totally transformed by placing a gorgeous Mid-Century Planter in them. Some of them are designed for rest and relaxation. Others are designed for aesthetics. No matter what their purpose, featuring Mid-Century Planters in them can ramp up their visual value a lot especially if you pair them with the right furniture and accompanying decor.

In home offices and study areas: Home offices are designed to be both beautiful and ergonomic. The ambiance of these spaces tends to run dry and unfriendly if not for a few strategically placed accessories and decor items. Mid-Century Planters are one of them. You can feature a statement planter in a highly visible corner of your office area. You can also use a tiny or medium sized one as an accessory on top of your office/study desk. If you can find a truly tiny one, then you can even feature a Mid-Century Planter on a statement bookshelf.

Best furniture and decor to pair with your midcentury planter

Here are some of the most common and best furniture/decor items that you can pair with your Mid-Century Planters:

Sideboard: Sideboard are another oversized accent furniture type that are mostly found in large entrance foyers, living rooms, and dining rooms. Depending on their size and styles, you can definitely pair a number of Mid-Century Planters with them. If the planter size is small and artistic, it can be featured on top of the sideboard surface. If the planter is large and statement worthy, then you can place one on either end of the buffet. Medium sized Mid-Century Planters can be clustered at one side of the sideboard in a trendy formation, as well.

End table: End tables and Mid-Century Planters are usually matched with colorful accent chairs to produce a holistic visual impact. The design of the end table can be used to introduce contrast against the design of the planter. The chair can be used as a backdrop set-up that you can use to take the aesthetic to a whole new level.

Stand-alone: Since Mid-Century Planters come in highly sculptural and statement-worthy forms, they can be used as stand-alone decor pieces as well. You can feature them in prominently places all across your layout. They can be used as freestanding statement objects in living rooms, bedrooms, outdoor areas, etc.

(Pro-tip: Always use the rule of three when you're pairing a planter with other furniture pieces, or even with other planters. This rule dictates that a tall object be paired with a short object while a medium sized object is placed in between them to bridge the visual gap.)

Mid-Century Planters are usually able to complement a number of interior design styles. The match nicely with a mid century modern coffee table. If you're looking for a specific subset, then here are some themes that these planters fit really well in:

Modern: Mid-Century Planters would look stunning in a sleek modern setting. Since there's minimal decor used in this particular style, these planters can emulate a sense of fullness within the stark ambiance. They can also help leech away the austerity of the sleek modern setting with their unique aesthetics and charismatic designing.

Eclectic: Mix and match is the name of the eclectic game and Mid-Century Planters can seamlessly integrate within such a design theme. You can pair them with accent chairs, replace typical end tables with them, or even use them as standalone focus pieces in empty nooks and corners.

Retro: Mid-Century Planters would make a great addition to retro style ambiances. They've got that shapely contrast and vintage flair down pat, which looks absolutely stunning in a retro inspired theme.

Scandinavian: The cozy, modish look of the Scandinavian style would make a great home for Mid-Century Planters. This style is famous for its sleek accessorization and nothing emulates that better than these planters. You can use them as accent pieces to spruce up empty nooks and alcoves.