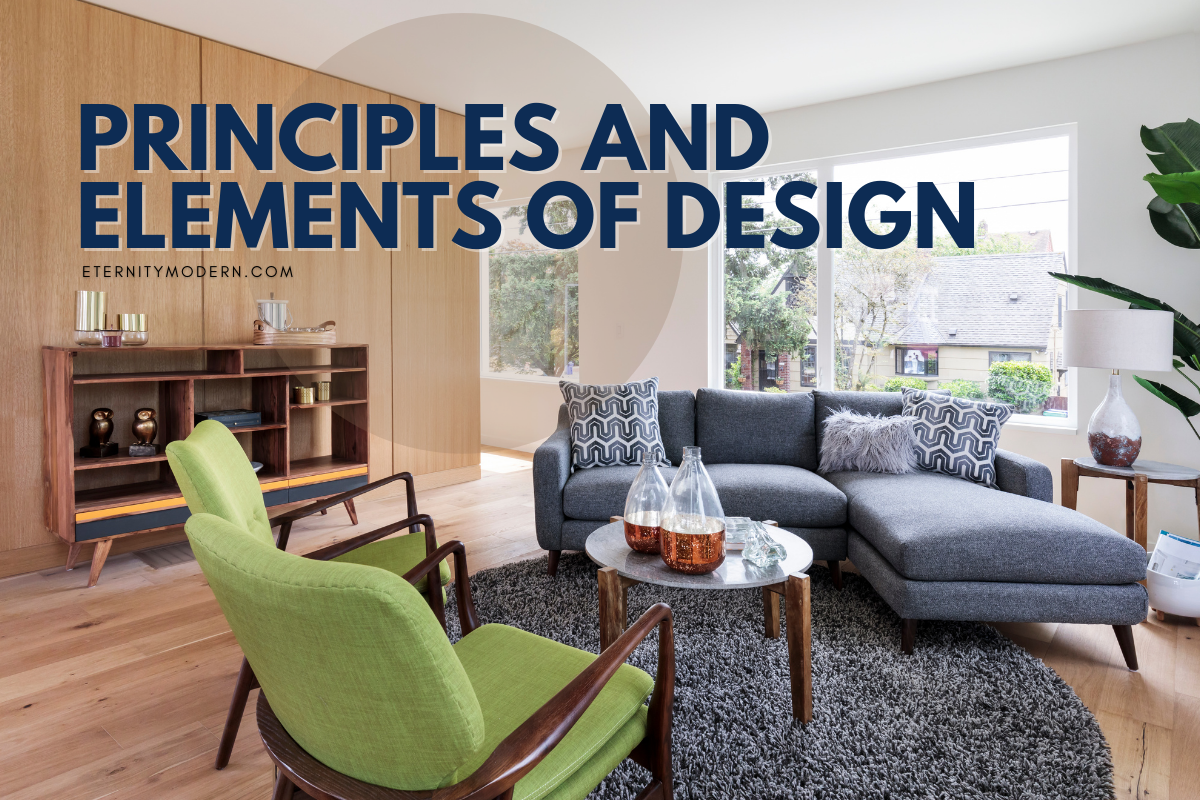 You walk into an interior, and you feel like: ˜This is just perfect! Everything seems to be cohesive and seamlessly put together. The reason behind this good composition is that the different elements that make up that space have been intrinsically organized by the principles of design.

The principles of design are time-tested rules or guidelines that must be followed so as to create functional yet aesthetic interior spaces. Much as design is all about creativity, it adheres to strict rules that work behind the scenes to make any decor interesting, stable, and a delight.

We cannot speak about principles of design without mentioning the elements of design. The latter are the building blocks of design; they serve as a foundation on which the principles of design can be applied. Whether you are an expert or a novice in the interior design field, here are the 6 basic principles that will make your next project stand out:

Principles and Elements of design

As the name suggests, the principle of unity and harmony ensures that all the elements of design in a space have a clear relationship with each other. It refers to how well those elements work together to highlight a common theme.

By working with harmony in mind, the interior design of any given space will serve as a visual guide to its users. The goal of harmonious interior design is to achieve not uniformity but similarity with the elements. As such, the elements should complement each other, and a smooth transition should be manifest from one to another. A design with unity is evident in its organization. The Mario Bellini Sofa can bring unity to any modern home.

To achieve harmony, the designer has to look at the space in its totality, considering the role of each element in meeting the functionality of the space. For instance, chairs, tables, wall hangings, light fittings, and other elements need to have a common thread that unites all of them to make up a harmonious whole.

There are at least five types of visual rhythm that interior designers can create: regular, alternating, random, progressive, and flowing. In all these types, the key ingredient to achieving rhythm is repetition. It's a fabulous way to harmonize a design that incorporates numerous differing elements. Thus, by creating repetitive or contrasting patterns in an orderly fashion, a sense of rhythm ensues, and this ensures the design is aesthetically pleasing.

An example of how rhythm can be established is by using a pattern or color on a chair, picking it up on a wall hanging and echoing it once more your mid century modern rug. Such repetition guides the eye around the room, and that's what rhythm is all about. A designer may opt to create rhythm in subtle format or in a painfully obvious manner. But even when the rhythm is subtle, it can create a sense of harmony throughout the space.

In interior design, emphasis is the principle that seeks to give particular importance, prominence, or value to a certain area or element within a space. The idea behind it is to create a focal point, an accent that acts as the point of interest. Emphasis can be attained by playing around with such elements as pattern, color, lighting, or texture to create an attention-grabber.

These elements must be artfully manipulated in a way that the
focal point domineer the rest of the decor while at the same time harmonizing with them. The surrounding elements should essentially complement the point of interest and share a contrasting feature that will effortlessly make the focal point stand out. In the absence of emphasis, a room would appear either scattered or boring as everything would be assigned equal importance.

There are uncountable ways you can create emphasis. Accent lighting can be deployed to focus the eye on a particular object. Lines are also effective in directing the eyes towards the focal point. A built-in focal point, such as a mid century fireplace or a window, can be accentuated by arranging furniture around it. Ideas are endless; just let your imagination run wild.

The ancient Greeks were inspired by nature to adopt the Golden Section, which reduced all proportion to a simple formula. This formula has been embraced by modern artists and architects.

You simply cannot ignore the principles of scale and proportion because this is what will ensure the elements that make up the interior decor are a perfect match. A harmony should be established between the size, dimension, color, or shape of the different elements, and a proportion has to be maintained. As an example: a room with a high ceiling demands that high-rise chairs should be preferred over low-rise chairs such as the ottomans.

Balance is all about equalizing the visual weight of the different elements that make up an interior space. The goal of this principle of design is to achieve a visual equilibrium through an orderly distribution of elements that have an equal visual weight.

The idea behind this principle is that every design element has a visual weight. Some elements are heavier than others; hence, the way they are arranged should create a feeling of visual balance. An interior that is well balanced will intrinsically feel comfortable and relaxing.

There are three types of balance:

Symmetrical: One half of a room mirrors the other side centered on a real or imaginary axis. The resultant is an orderly, neat decor that gives a calming feel to the living space. For example, two Coconut chairs on either side of a Noguchi coffee table can be said to be symmetrically balanced. This type of balance is easy to achieve. But if not artfully executed, it can become monotonously boring.

Asymmetrical: Elements are laid out in relation to an imaginary axis that is not centered within the overall design. These elements have equivalent visual weight but differ in size, color, shape, and texture. By keeping the scale correct, balance is achieved. It is a little harder to achieve compared to symmetrical balance, but the output is usually more natural and inspiring.

Radial: All elements are arranged in a circular symmetry in a way that seems to radiate from a central focal point. An example would be a chandelier or a round dining table sitting on a circular rug and chairs around it.

Contrast is the secret constituent that gives those memorable interiors their impression. As a principle of design, contrast seeks to make different elements stand out by placing them adjacent to each other. When used correctly, this fundamental principle of design can infuse a massive dose of visual interest to your space while at the same time making it harmonious.

Color is probably the most effective element in creating contrast. But you can also achieve it through other elements such as form and space.

Here are some examples of how to achieve contrast: One can place cushions or prints of two opposite colors to make the element distinguishable. Or you could combine two or more forms such as a rectangular sofa and a circular wall painting to distribute the attention between the two forms. You could also add mid century modern dining chairs to a contemporary dining table. Another way would be to divide the available space into positive and negative usable spaces.

Applying contrast adds intrigue and drama into the interior design. It is also a crucial aspect of creating accessible design. Still, you should be cautious not to overdo it as you would run the risk of losing the magical touch of drama.

Previous Color Trends 2021: The Definitive Guide
Next 43 Bathroom Makeovers That Will Make You Want To Update Yours Today
Related Posts